After a not too brief hiatus away from the Williamsburg area, I finally returned to the Rockefeller Library in late Autumn to continue research efforts—that carry on into the winter.  It’s been months since the first blog entry during the summer and time marched forward.  Apparently, my creative efforts screeched to a temporary halt due to holiday and family travel issues. Fortunately, time stood still and remained in the early colonial period in the Rockefeller library.

Walking up to the front of the building, I was barred from entering by the locked monolithically tall, heavy glass door.  A sign directed me to ring the bell in order to gain entry.  The library has curious security measures in effect.  After showing my identification to the reserved woman who opened the door, she allowed me in and asked if I was familiar with the library.  A simple yes response granted me access.  I inhaled deeply, breathing in the slightly musty smell of aging books. With a sense of purpose, I was able to reset my focus to an earlier time and moved into another realm of research and creative possibilities.

Drawn to the section featuring early settlers, I noted the books that chronicle stories about the ghosts of early American colonists.  A book was left by a previous research patron on a low wooden stepstool regarding Virginia’s underground railroad.  Of interest for possible future artwork because slavery during the colonial period is woven into the theme of the Footsteps from the Past series.  A small movement at the end of the long aisle of books to my left drew my attention.  Briefly, I wondered whether it’s possible that an ethereal trace of the early settlers can remain with their stories. 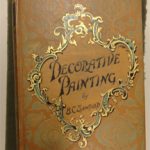 After some research, I arranged to view a book kept in the special collections vault. The vault holds books that provide a glimpse into our early American past, stored in temperature-controlled vault-type rooms. The book that I wanted to examine, Decorative Painting – A practical handbook of painting & etching upon various objects & materials for the decoration of our homes, by B. C. Saward, was brought out from the vault, handled with white gloves.  The leather-bound book with elaborate gold scrollwork patterns is exquisite.  Of interest, the Scene Painting chapter states, “Scene painting is executed with powder colours mixed with whiting and size, and is a kind of distemper colouring.”   Saward further directs the reader to “make a small water-colour sketch of the scene.”  Although the instruction cannot be literally applied to the painting process that I use, it is inspirational on a creative level. I made the decision to do things a bit differently this time. Rather than rely solely on photographs and my memory to create possible compositions for my next illustration in the Footsteps from the Past series, I was persuaded by Saward’s suggestion to start by sketching scenes.

Returning home, I dug to the bottom of a storage box in my studio and found an almost forgotten sketchbook, drawing pens, and colored pencils. Picking up the interrupted, fragmented creative vision where I left off is a challenge.  It’s been awhile since I walked the streets of Colonial Williamsburg and focused on the Footsteps from the Past series—but I’m armed with art supplies for sketching and ready to begin again.

― Lewis Carroll, Alice in Wonderland:  “I think I could, if I only knew how to begin.  For, you see, so many out-of-the-way things had happened lately that Alice had begun to think that very few things indeed were really impossible.”

Previous StoryFootsteps from the Past Notes